Hi everyone! We will be having our first talk of the semester on Tuesday, January 28th, 2019 at 4:10pm. A post doc Christian Ketterer will be speaking.

Details of the room will be announced shortly!

Abstract: In this talk I will explain the concepts of synthetic sectional curvature bounds and synthetic lower Ricci bounds and the ideas behind them. Synthetic lower Ricci bounds originated in the last 20 years from the encounter of several mathematical fields, including Riemannian Geometry, Optimal Transport and Information Theory. I will briefly describe these fields and show how they mixed.

Hi everyone! Just a reminder that this Thursday, Jan 9, there will be a graduate applications workshop at 4pm in BA6183. For those of you who are applying to graduate schools now or are interested in applying in the future, this is a great opportunity to hear about the application process, what can be expected, and to ask specific questions to faculty and graduate students. Please fill out the (short!) RSVP form below if you are interested in attending – there is a space to ask specific questions in the form in advance!

If you are interested in attending, please fill out the Google form below and include any questions you have for the panel.

Join us for our last talk before the new year, given by Justin Martel, a former graduate student at U of T. The talk will be Thursday, December 12th at 5:10pm in BA6180. Pizza will be served in the Graduate Lounge at 4:40pm.

Abstract: Is the distance from Toronto to Moscow today the same as the distance 2000 years ago? To the mathematician, ”Surely not!” when the distance is reckoned at 7500 kilometers ac- cording to the model globe in his office. But ”Distance” as- sumes entirely different dimensions when measured in terms of Energy-variables. A distance changes when the actual transit is taken into account. And how is it possible for the Hominid, capable of sustaining only an average of 75 Watts throughout an eight hour day, to transverse such great dis- tance?

This talk will describe, in simple terms, the principles of Optimal Transportation. We will focus on elementary physical models, energy, and Least Action Principles. 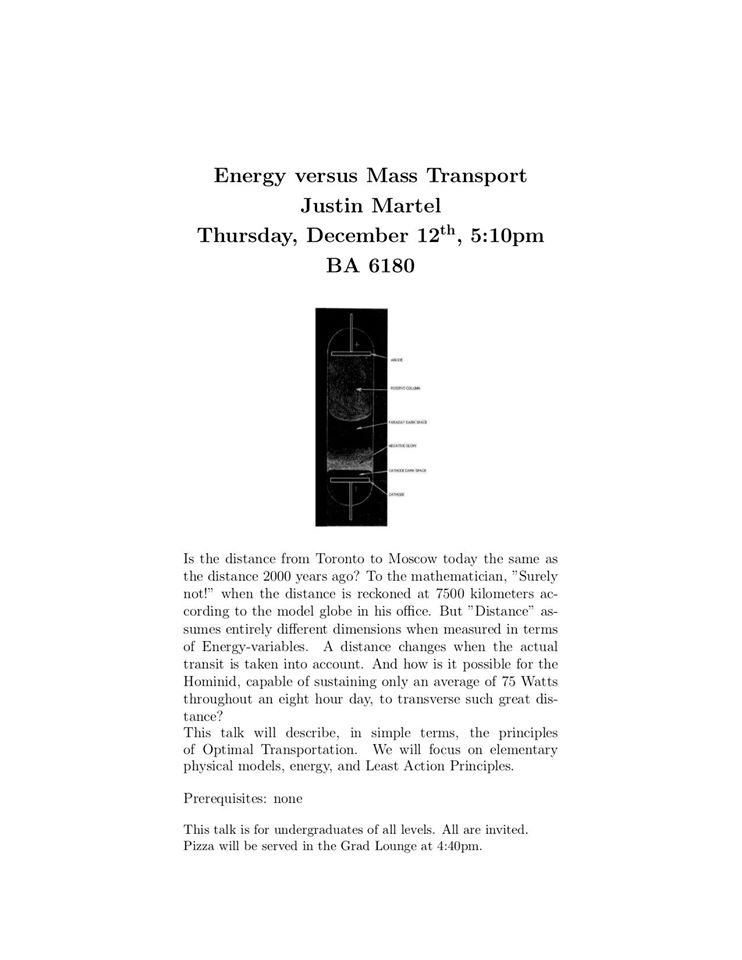 Come join us tomorrow for Professor Kasra Rafi’s talk about Hyperbolic Geometry!
The talk will be on Tuesday, December 3rd, from 6:10-7pm in BA025. Pizza will be served! 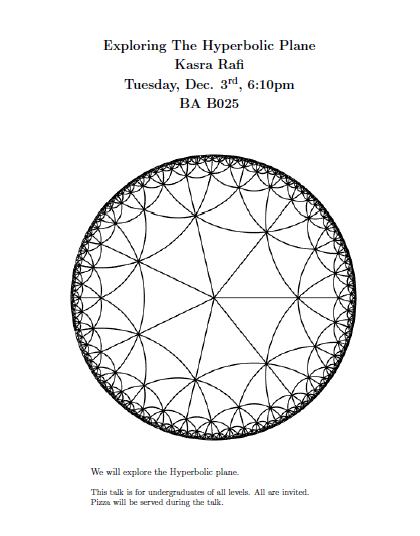 Hi everyone! Our next event will be talks from the 2019 Canadian Undergraduate Mathematics Conference (CUMC) by three students, Isabel Beach, Curtis Michael and Nikki Sigurdson. It will be Friday, October 25th, 2019 at 6:10pm, in BA 6183.
Pizza and pop will be provided!

The Beauty of the Hyperbolic Plane, by Isabel Beach

An Introduction to Mapping Class Groups and the Nielsen-Thurston Classification of Mapping Classes, by Curtis Grant 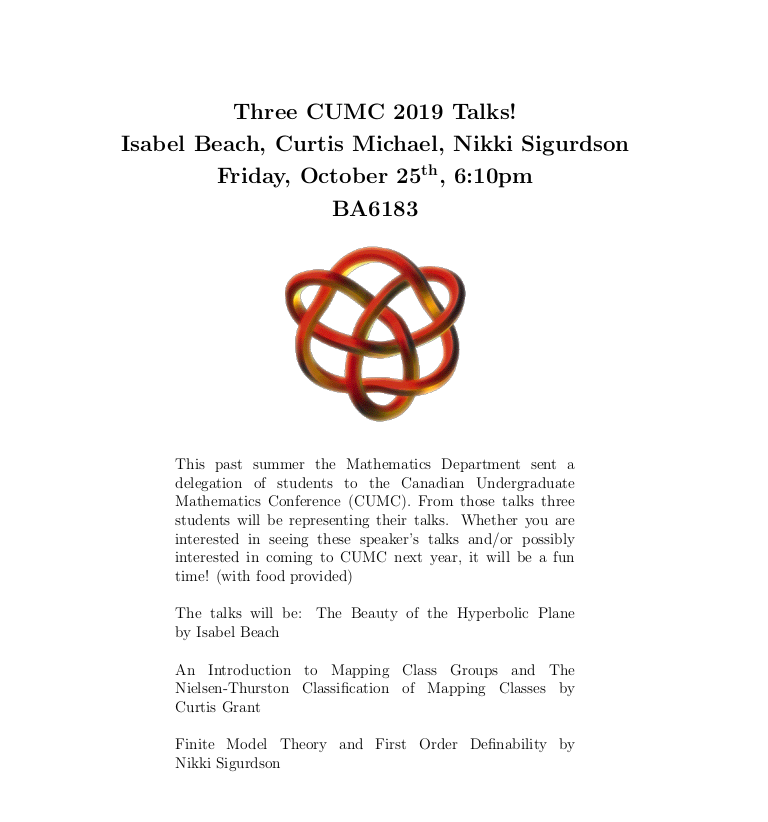 Math Union Hoodies are available for pickup tomorrow (Monday, April 8th) from 1:30-4:30 pm in the math undergrad lounge. More times for pick up will be announced tomorrow night.

You must bring your t-card in order to pick up your hoodie. See you tomorrow!

Abstract: What numerical characteristics do geometric shapes have? You will probably think of the length of a curve, or the volume of a 3-dimensional shape, or an angle between two directions in space. In this talk we will discuss a characteristic of curves called curvature, which measures the sharpness of a turn while moving along a path.

It turns out that this characteristic controls the process of curve evolution, called the CSF, “curve shortening flow”. We will talk about some important work that was done in the 80s on curves in R^2 and see how the CSF can reshape a curve.

Title: A Peek into Category Theory

We will start the following question: take two groups G and H and look at the set of homomorphisms between them. Does this set have a group structure? To answer this question, we will introduce some basic notions of category theory. We will reformulate our question in categorical terms and then see how categories help us solve it. Along the way, we’ll define what categories and functors are and look at examples. We’ll actually see that many mathematical objects we know are categories.